The problem of identity takeover

The root cause of much identity theft and fraud today is the sad fact that customer reference numbers, personal identifiers and attributes generally are so easy to copy and replay without permission and without detection. Simple numerical attributes like bank account numbers and health IDs can be stolen from many different sources, and replayed with impunity in bogus transactions.

Our personal data nowadays is leaking more or less constantly, through breached databases, websites, online forms, call centres and so on, to such an extent that customer reference numbers on their own are no longer reliable. Privacy consequentially suffers because customers are required to assert their identity through circumstantial evidence, like name and address, birth date, mother’s maiden name and other pseudo secrets. All this data in turn is liable to be stolen and used against us, leading to spiraling identity fraud.

To restore the reliability of personal attribute data, we need to know their pedigree. We need to know that a presented data item is genuine, that it originated from a trusted authority, it’s been stored safely by its owner, and it’s been presented with the owner’s consent. If confidence in single attributes can be restored then we can step back from all the auxiliary proof-of-identity needed for routine transactions, and thus curb identity theft.

A practical response to ID theft

Several recent breaches of government registers leave citizens vulnerable to ID theft. In Korea, the national identity card system was attacked and it seems that all Korean’s citizen IDs will have to be re-issued. In the US, Social Security Numbers are often stolen and used tin fraudulent identifications; recently, SSNs of 800,000 Post Office employees appear to have been stolen along with other personal records.

Update 14 June 2015: Now last week we got news of a hugely worse breach of US SSNs (not to mention deep personal records) of four million federal US government employees, when the Office of Personnel Management was hacked.

We could protect people against having their stolen identifiers used behind their backs. It shouldn’t actually be necessary to re-issue every Korean’s ID. Nor should it matter that US SSNs aren’t usually replaceable. And great improvements may be made to the reliability of identification data presented online without dramatically changing Relying Parties’ back-end processes. If for instance a service provider has always used SSN as part of its identification regime, they could continue to do so, if only the actual Social Security Numbers being received were known to be reliable.

The trick is to be able to tell “original” ID numbers from “copies”. But what does “original” mean in the digital world? A more precise term for what we really want is pedigree. What we need is to be able to present attribute data in such a way that the receiver may be sure of their pedigree; that is, know that the attributes were originally issued by an authoritative body to the person presenting or claiming them, and that each presentation of an attribute has occurred under the owner’s control.

These objectives can be met with the help of smart cryptographic technologies which today are built into most smart phones and smartcards, and which are finally being properly exploited by initiatives like the FIDO Alliance.

There are ways of issuing attributes to a smart chip device that prevent them from being stolen, copied and claimed by anyone else. One way to do so is to encapsulate and notarise attributes in a unique digital certificate issued to a chip. Today, a great many personal devices routinely embody cryptographically suitable chips for this purpose, including smart phones, SIM cards, “Secure Elements”, smartcards and many wearable computers.

Consider an individual named Smith to whom Organisation A has issued a unique attribute N (which could be as simple as a customer reference number).If N is saved in ordinary computer memory or something like a magnetic stripe card, then it has no pedigree. Once the number N is presented by the cardholder in a transaction, it has the same properties as any other number. To better safeguard N in a chip device, it can be sealed into a digital certificate, as follows:

1. generate a fresh private-public key pair inside Smith’s chip
2. export the public key
3. create a digital certificate around the public key, with an attribute corresponding to N
4. have the certificate signed by (or on behalf of) organisation A. 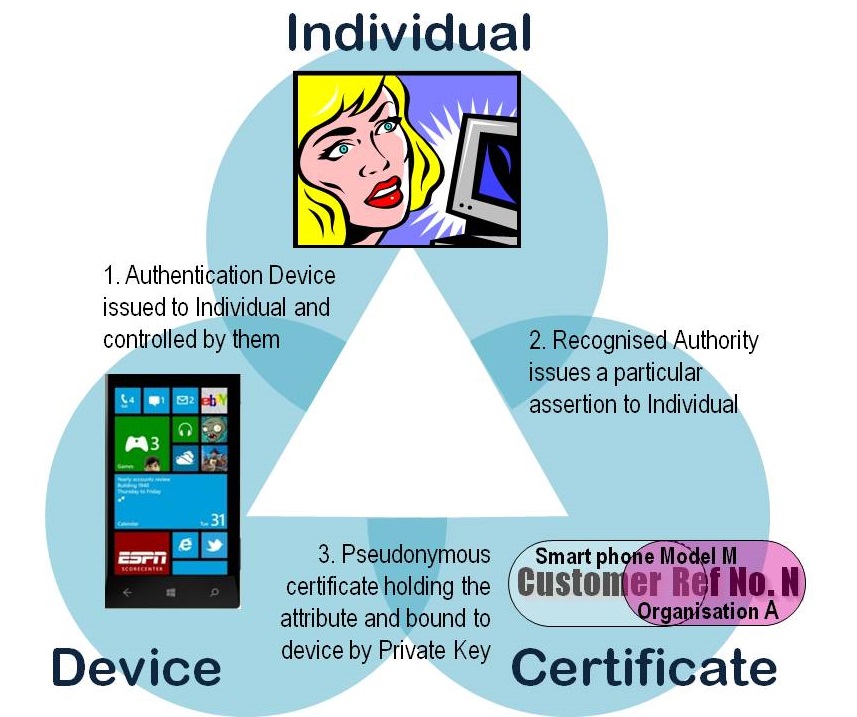 The result of coordinating these processes and technologies is a logical triangle that inextricably binds cardholder Smith to her attribute N and to a specific personally controlled device. The certificate signed by organisation A attests to both Smith’s attribute value N and Smith’s control of a particular device. Keys generated inside the chip are retained internally, never divulged to outsiders .It is not possible to copy the private key to another device, so the logical triangle cannot be reproduced or counterfeited.

Note that this technique is at the heart of the EMV “Chip-and-PIN” system where the smart payment card digitally signs cardholder and transaction data, rendering it immune to replay, before sending it to the merchant terminal. See also my 2012 paper Calling for a uniform approach to card fraud, offline and on. Now we should generalise notarised personal data and digitally signed transactions beyond Card-Present payments into as much online business as possible.

When Smith wants to present her attribute N in an electronic transaction, instead of simply copying N out of memory (at which point it would lose its pedigree), Smith’s app digitally signs the transaction using the certificate containing N.With standard security software, anyone else can then verify that the transaction originated from a genuine device under Smith’s control, with an attribute certified by A. And above all, this assurance is reliably made without needing to name Smith or reveal anything about her other than the attribute of interest.

Note that N doesn’t have to be a customer number or numeric identifier; it could be any personal data, such as a biometric template, or a package of medical information like an allergy alert, or an isolated (and anonymous) property of the user, such as her age.

The capability to manage multiple key pairs and certificates, and to sign transactions with a nominated private key, is increasingly built into smart devices today. By narrowing down what you need to know about someone to a precise attribute or personal data item, we will reduce identity theft and fraud while radically improving privacy. This sort of privacy enhancing technology is the key to a safe Internet of Things, and it is now widely available.

Perhaps the best thing governments could do immediately is to adopt smartcards and equivalent smart phone apps for holding and presenting such attributes as official ID numbers. The US government has actually come close to such a plan many times; Chip-based Social Security Cards and Medicare Cards have been proposed before, without realising their full potential. These devices would best be used as above to hold a citizen’s identifiers and present them cryptographically, without vulnerability to ID theft and takeover. We wouldn’t have to re-issue compromised SSNs; we would instead switch from manual presentation of these numbers to automatic online presentation, with a chip card or smart phone app conveying the data through digitally signatures.